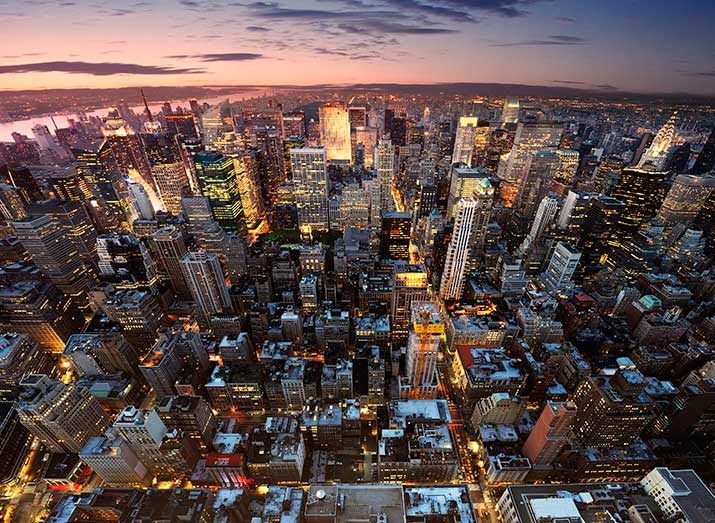 Like any entrepreneurial venture, it all started with an idea. Simon began its expansion into Manhattan with the MSF in NYC program and 19 students, a move prompted by a student project in Dean Mark Zupan’s Meliora course on ideas to improve the School. “New York City is our second home,” Zupan had said. “It’s the number one recruiting base outside of Rochester, the number one placement opportunity for our graduating students, and still the world’s financial and media capital, so it’s absolutely critical that we have a presence there.”

After internal discussions with administrators and senior faculty, the School pursued the idea and moved forward with a strategy to expand its presence in New York City.  Resources were dedicated and the School hired Janet Anderson ’90S (MBA), as Executive Director of Professional Programs, to lead the effort. “We assessed how we could best utilize our proximity to New York City to help the School,” explains Carin Conlon ’99S (MBA), Assistant Dean for Executive and Professional Programs, who oversees the School’s Executive MBA, part-time MBA and MS, non-degree, online, and international program offerings. “We determined that the best ways to do that were through educational programs that would build corporate relationships, enhance placement, raise our brand profile in the area and beyond, and engage alumni, since that is our second largest alumni base overall.”

Anderson later hired a Manhattan-based staff member to help with daily operations and program administration. In just three years, Simon’s New York City presence has grown significantly.  “We have had more than 70 students go through the program, so we now have a strong base of new alumni in New York City thanks to having a part-time program there,” Anderson says. “Those students represent more than 50 unique employers, so that creates an opportunity to build relationships that may lead to job opportunities for our students in Rochester. Simon also hosts an array of social events and guest lectures attended by both Rochester and New York City-based alumni and students. That offers a new network that we just didn’t have before, and that’s pretty powerful,” Anderson says.

Building on that success, Simon introduced a new MS in Management in New York City this past July, targeting students with either a liberal arts background or technical degree who are looking for a solid underpinning in management studies. Students will take classes on the same weekends as MS in Finance students further increasing their networking opportunities. The School has filed for extension center status at the AMA site with the New York State Department of Education, and plans are under way for additional program offerings there in the near future. “One thing that we’re doing as part of the growth plan is to acquire space in New York City,” Anderson says. “That space not only gives us the opportunity to offer programs there, but also provides our students in Rochester with a home in New York City.”

To achieve that objective, Simon has subleased more space in the AMA building to establish a local hub for student services and support, in addition to the existing classrooms. According to Conlon, having a home in New York City makes it more accessible for Simon students and corporate partners in the tri-state area to engage with Simon. “It helps us make our students more accessible to employers; it gives students additional job and internship opportunities; and, by building our brand awareness in the area, it helps bring new opportunities to the School, whether that’s students, corporate partners for hiring, or additional programs,” she says.

Employers are noticing. Anderson says feedback has been positive. “Employers we’ve reached out to understand the benefit of the programs that we’re offering because they now have the ability to improve the skill set of their employees through a rigorous Simon education,” she says. “The format works extremely well over a 13-month period and the downtime is minimal, allowing for a very concentrated program of study for that time period.

“We now have the inaugural MS in Finance class a year later from graduation, and two thirds of that class received promotions either while enrolled in the program or in the three months subsequent to that,” she notes. “The word has spread, and we’re now getting student recommendations from one class to the next, helping our recruiting efforts. Clearly, there is a high degree of satisfaction and ROI, as graduates are promoting the program among their peers and others.”

As Managing Partner and Head of Alternative Investments at Belpointe in New York City and a frequent CNBC contributor, Jeffery Tomasulo ’95, MS candidate, Class of 2014, is always anticipating the next big stock market opportunity.  Jeff’s clients depend on him, as a trader and investor, to analyze the markets and come up with new and promising investment opportunities.  That keen eye serves Jeff well, both in his work for his clients and in his own career.

With the goal of advancing his career and building an academic foundation in finance, Jeff started looking into master’s programs in finance in late 2012. When he heard about Simon’s MS in Finance in New York City, he wasn’t sure he would have the time to devote to earning a graduate degree with his demanding work schedule. But, he says, Simon made it possible by offering courses on alternate weekends in a convenient midtown Manhattan location at the American Management Association on a flexible, accelerated part-time basis—something other top business schools aren’t currently providing.  The remaining two courses are weeklong programs in Rochester in July and at a European location at the end of the program in March of the second year.  Jeff is one of 26 MSF New York City students working toward a graduate degree in finance in just 13 months.  “I think the program is great for someone like myself, who’s been working in finance for 20 years,” Jeff says. “New York City is the finance capital of the world, so having a presence here is key. Being a UR alum, pursuing a Simon master’s program in New York makes me very proud.”

Students also have the option to return to Rochester to earn a Simon MBA in just one additional year of study within five years of completing the MS.  Dan Shin is the first MSF graduate enrolling this fall to complete the MBA.

Another aspect of Simon’s New York City expansion is to build brand awareness through signature events such as the fourth annual Simon New York City Conference, held on May 9 at the Roosevelt Hotel. Each year, the conference brings together leading policy makers, industry leaders, academics, and national media to discuss critical issues of financial regulation and the business considerations it affects. This year’s theme, “Reform at a Crossroad: Economic Transformation in the Year Ahead,” featured Executive of the Year Award recipient Lou Gerstner, Chairman of The Carlyle Group and former Chairman and CEO of IBM Corp.; Steve Forbes, CEO and Editor-in-Chief of Forbes Inc.; Charles Plosser, President and CEO of the Federal Reserve Bank of Philadelphia and former Simon School Dean; and Joan Solotar, Senior Managing Director, Head of the External Relations and Strategy Group, The Blackstone Group, among other notable Simon and University faculty and C-level alumni. Past conferences have featured Jamie Dimon, Chairman and CEO of JPMorgan Chase & Co.; Jeffrey Immelt, Chairman and CEO of General Electric; Christopher J. Christie, Governor of the State of New Jersey; Lawrence Kudlow ’69, Host of CNBC’s The Kudlow Report; and Robert Khuzami ’79, Chief Enforcement Officer at the Securities and Exchange Commission, among others.

“We’re making a difference in society, and our vision includes articulating the value entrepreneurship and markets play in creating value in bettering society,” says Dean Zupan. “This conference is a wonderful way to epitomize that.”

Conlon, who oversees the conference, couldn’t agree more. “The value of the conference is being able to present that caliber of speaker in a unique setting so that students, alumni, and our corporate partners can benefit from bringing them together,” she says. “Another aspect is the opportunity for both senior alumni and faculty to share their thoughts and perceptions on what is happening in the global economy today.”

The conference is designed to serve multiple purposes: build brand awareness through media coverage, engage alumni from the tri-state area and other cities, provide a learning and networking event for Simon students, and invite corporate partners to attend as guests.
Conlon is especially proud of how much has been accomplished in New York City over the past four years since the idea came out of the Meliora course. “We went from a glimmer in someone’s eye to having two degree programs plus the annual conference with the stature and the media reach that it has. It’s really incredible for an academic institution to accomplish all of that so quickly with such a small team.”

Anderson says the success of the expansion was the culmination of many factors working together. “It grew from a student idea, to an alum, Dan Lazarek ’91S (MBA), who felt passionate enough to provide seed money toward it, to a dean willing to take a risk and bring someone in to lead it, to an advisory board to get things started and make it happen collectively, and to the engagement of the New York City community to help improve it. It truly was a collaborative effort.”

—by Charla Stevens Kucko
Posted by Unknown at 10:24 AM